So I’m done with my first semester of grad school! I think God for His faithfulness in bringing me through all the ups and downs and the weird times that I just don’t know what is happening lol. Also mostly thank God for helping me settle down and assimilate into life here in NYC. I always tell people how living in NYC is super different from living in Singapore. But then actually I realised that there are many similarities too… like how
1. I use the subway to get around everywhere
2. I use english to communicate
3. NYC is a very technically connected city.. almost everybody has data on their phone and the city heavily relies on that to function
4. Very cosmopolitan community
5. People generally like to keep to themselves
etc…
Both Singapore and NYC are cities after all and for that they are similar in many aspects.

Anyway, now that school is out I have been attending quite many concerts!
The most memorable one for me is La Boheme at the MET. I think La Boheme is my all-time favourite opera!! I like how the plot is very real.. it is about the life of Parisian artists in the 18th century, that even though they are poor and don’t have much – they can still lead very rich and meaningful lives. But then tragedy strikes and because they are poor and don’t have much, they are unable to fully cope with what life throws at them. It’s moving, sad, but humorous at the same time! The librettist added playful and sarcastic banter and I really appreciated that. And of course, the music is beautiful!

Then I attended SymphoNYChorus’ concert! They are a christian group that puts up performances at churches/children’s homes/elderly homes/schools etc. And they did a concert of christmas tunes and carols. It was very heartwarming to be reminded of the true reason for the season – that Jesus came down to Earth to save us. And that is why we can have true and infinite joy.

Then! I went to watch Handel’s Messiah by the New York Philharmonc. This was my first time listening to the NYPhil and therefore also my first time in their performing home – the David Geffen Hall. I like the hall, it’s very posh-looking especially since it has a glassy exterior which allows audiences to overlook Lincoln Center and the rest of the city. Anyway, I was most impressed by the three singers! They each have so much colour in their voice and have such a clear idea of what they want to do musically. It is sheer pleasure for the audience because they communicated so directly to the heart. 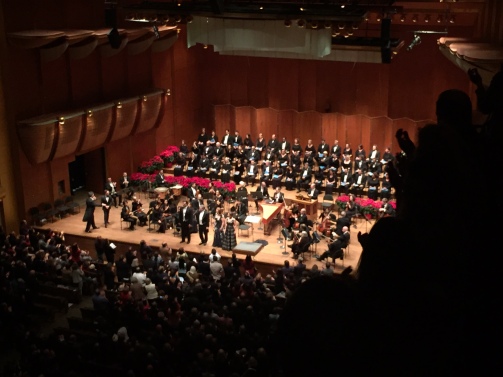 Up next (haha, told you I was going to many concerts) was Joyce Didonato’s concert at Carnegie! It was entitled In War and Peace and she chose mainly works by Handel and Purcell that can depict this contrast between war and peace. It was really interesting how she used her music as the starting point for a rhetoric about conflict and peace in our world today and also that within us. She even has a website for people to post their answers to the question she asks “In the midst of chaos, how do you find peace?” (inwarandpeace.com) I’m super inspired by how she dares to step beyond making music, but to provoke people to think how music can make a difference in our world.

ok and finally the last concert I went to was Salome at the MET Opera! I really enjoyed it and I guess I enjoyed how the MET decided to attenuate the risque-ness of the opera. But as usual, excellent and world-class singing and playing. 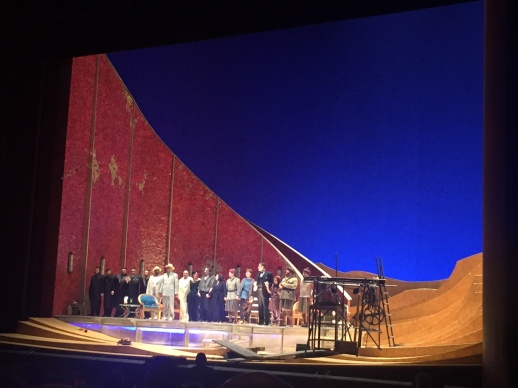 OK yes, there has been feasting too to celebrate the beginning of the holiday season!

and speaking of cold…. IT SNOWED. Being the tropical bird that I am, I was obviously very excited. I woke up to this:

But then the excitement slowly died down when I realised how difficult it is to walk in the snow. It’s really slippery! And when the snow starts to melt, really deep puddles start to form and it’s slushy everywhere ):

“When the set time had fully come, God sent his Son, born of a woman, born under the law, to redeem those under the law, so that we might receive adoption to sonship.” Galations 4:4-5

2 replies on “School’s Out”

Wah… all the concerts’ programs!!!